INTRODUCTION:Rearrangements of the ALK gene (also known as CD246 or NBLST3), initially discovered in anaplastic large cell lymphoma, have also been found in many types of malignant tumors, including B and T-cell lymphomas, plasmacytomas, neuroblastomas, esophageal, breast, kidney, colon, thyroid and lungcarcinomas, among others.A significant percentage of cases of non-small cell lung cancer (3-13%) show abnormalities of the ALK gene and are likely to targeted treatments withspecific tyrosine kinases inhibitors that show significant benefits as compared to conventional chemotherapy.
INTENDED USE: The ALK Break Apart FISH probe is designed to detect rearrangements in the ALK human gene located in the band of the chromosome 2p23.2. Aside from detecting breaks that can lead to translocation of parts of the gene, to its inversion or to its fusion with other genes, the probe can also be used to identify other aberrations of ALK such as deletions or amplifications. 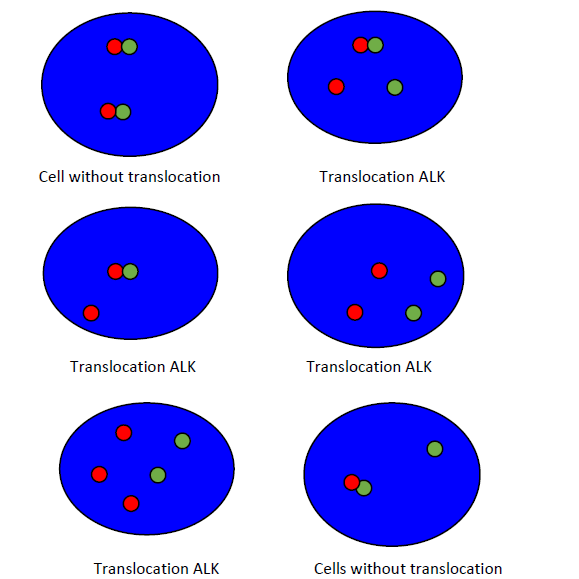