INTRODUCTION: The product of the human BCR gene, breakpoint cluster region (BCR) protein, also called BCR1, PHL or renal carcinoma antigen NY-REN-26, is a ubiquitously expressed serine/threonine kinase and GTPase-activating cytoplasmic enzyme. ABL1 (Abelson murine leukemia viral oncogene homolog 1, also called c-ABL, JTK7, p150) is a cytoplasmic and nuclear tyrosine kinase involved in a variety of cellular processes including migration, adhesion, differentiation and apoptosis. It is also an important component of the T-cell receptor signaling system and required for T-cell development and function.
The t(9;22)(q34;q12) reciprocal translocation between BCR and ABL1 leads to a lengthened chromosome 9 (9q+) and a shortened chromosome 22 (der(22), 22-), also called Philadelphia-chromosome (Ph, Ph1). Discovered in 1960, it is a hallmark of chronic myelogenous leukemia (CML) and was the first consistent genetic abnormality identified in any human cancer.The fusion combines varying portions of the 5’- part of BCR with the 3’-part (exons 2-11) of ABL1 and leads to the production of a fusion protein in which the tyrosine kinase of ABL is constitutively activated.The Philadelphia chromosome is present in virtually all CML cases.16 However, it is also found in a subset of adult and pediatric acute lymphoblastic leukemia (ALL) and sometimes in acute myelogenous leukemia (AML) and other malignancies such as the very rare chronic neutrophilic leukemia (CNL).
INTENDED USE: The BCR-ABL1 Fusion/Translocation FISH probe kit pair is designed to detect rearrangements involving regions of the human BCR (Breakpoint cluster region) locus, located on chromosome band 22q11.23, and of the human ABL1 gene on 9q34.12. The Probe kit is optimized to reveal the typical t(9;22)(q34;q11) translocation as well as other translocations between the two genes, in metaphase and interphase blood or bone marrow cells. 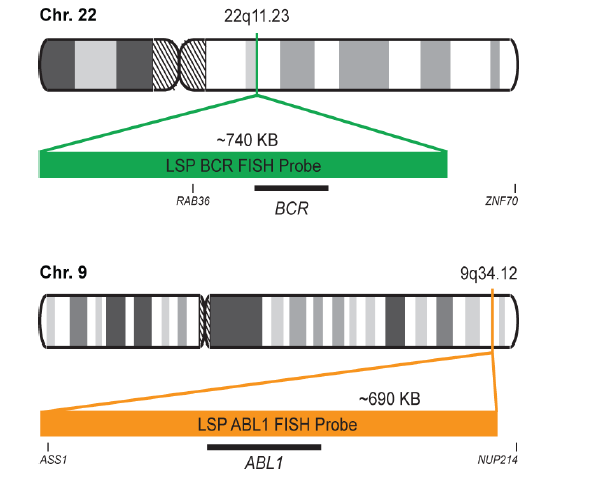