INTRODUCTION: Rearrangements and abnormal expression of the MYC gene (also known as MRTL, MYCC, c-Myc or bHLHe39) have been described in Burkitt’s lymphoma, where its positivity has diagnostic utility within a clinical, morphological and immunohistochemical context. On the other hand, in large or non-classifiable diffuse B-cell lymphoma, the MYC translocation has a prognostic value and dictates a more aggressive treatment of the neoplasm. On the other hand, together with the determination of the translocation of the BCL2 and BCL6 genes, it aims to establish the double or triple-hit character of the neoplasm. Other hematological neoplasms, myelomas, as well as breast, cervical, colon, ovarian and other tumors may present MYC translocation.
Most Burkitt lymphoma cases show the t(8;14)(q24;q32) [MYC-IGH] and less commonly the t(8;22)(q24;q11) or t(2;8)(p12;q24). The translocation is present in both the endemic African Burkitt lymphoma and in the non-endemic tumor type (Europe, America, and Japan). In case the Burkitt lymphoma infiltrated the bone marrow (leukemic phase) the MYC-translocation can be demonstrated in the bone marrow or blood as well.
INTENDED USE: The IGH-MYC Fusion/Translocation FISH probe kit t is designed to detect rearrangements involving the human IGH locus and MYC gene, located on chromosome bands 14q32.33 and 8q24.21, respectively. 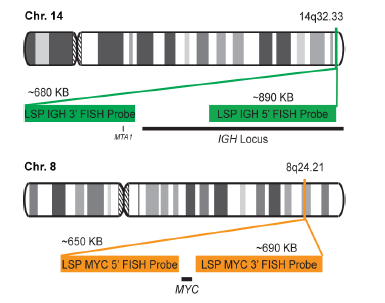