INTRODUCTION: Members of the BCL2 family of proteins play important roles in the control of programmed cell death (apoptosis). They comprise proteins that facilitate apoptosis, as well as apoptosis inhibitors. Lymphomas are malignant conditions of the lymphatic part of the circulatory system. One of the most frequent subtypes of lymphoma in adults is follicular lymphoma, a cancer originating in certain B cells that is often symptomless in its early stages. Nearly half of lymphomas diagnosed in adults are of the follicular subtype. One of the widely recognized molecular characteristics of this subtype of the condition is that BCL2 is regularly dysregulated in follicular lymphomas, most often by gene translocation. In fact, BCL2 protein has been detected in virtually all transformed cells in samples from follicular lymphoma patients, whereas it was not seen in non-neoplastic cells or in normal lymph nodes. One particularly common rearrangement is a reciprocal translocation, in which the BCL2 gene, normally on chromosome 18, is relocated to the immunoglobulin heavy chain (IGH) gene region on chromosome 14 and is overexpressed under the influence of an enhancer element on that locus. However, fusion of BCL2 with other genes, including AFF3 and the IGHL@ and IGK@ gene loci, has also been observed.

INTENDED USE: The IGH-BCL2 Fusion/Translocation FISH probe kit is designed to detect rearrangements involving regions of the human IGH locus, located on chromosome band 14q32.33, and of the human BCL2 gene on 18q21.33. The kit contains two differentially labeled Locus Specific Probe (LSP) pairs. One set of probes covers the 5’ (start) portion of the BCL2 gene and some upstream untranslated genomic sequence as well as sequences downstream of the 3’ (end) part of the gene. The two probes are flanking sequences on both sides and inside the BCL2 gene where breakpoint clusters and individual breakpoints have been found. The second probe pair spans the immunoglobulin heavy chain gene locus (IGH@) and consists of a portion matching the 5’ (start) region encoding variable gene segments (IGHV), and a part that covers the 3’ (end) and downstream sequences. This probe pair is flanking an area of the IGH gene comprising constant gene segments (IGHC) as well as the delta segment (IGHD), joining region (IGHJ) and epsilon domain (IGHE). Almost all known breakpoints in IGH@have been mapped to this region. 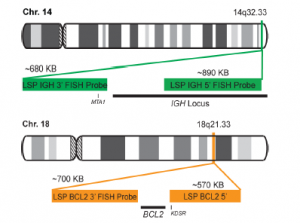