INTRODUCTION: Cyclin D1, also called B-cell leukemia/lymphoma 1 (BCL1) or parathyroid adenomatosis 1 (PRAD1), belongs to a family of highly conserved proteins that serve as key regulators of the cell cycle. They form complexes with, and thereby regulate the activity of cyclin-dependent kinases (CDKs), a family of protein kinase enzymes required for progression through the cell cycle. Cyclin D1 is overexpressed in many tumor types. For example, it has been found amplified, and proven to be a marker of poor prognosis, in a percentage of breast cancer cases. CCND1 is also aberrantly activated in a number of hematological malignancies. It is mainly found in mantle cell lymphoma (MCL), a relatively rare non-Hodgkin’s lymphoma type. The most common translocation in MCL is one in which CCND1 is moved to the IGH locus on chromosome 14; juxtaposition of the two genes leads to activation of the CCND1 gene via enhancer elements in the IGH locus. However, fusion of CCND1 with other genes, including FSTL3 and the IGHL@ and IGK@ gene loci, has also been observed. CCND1 activation by translocation also occurs in B-prolymphocytic leukemia, plasma cell leukemia, splenic lymphoma with villous lymphocytes and sometimes in chronic lymphocytic leukemia and multiple myeloma. Detection of CCND1 gene translocation is now widely recommended for the discernment of specific lymphoma subtypes. Furthermore, it is a predictor of improved survival in multiple myeloma patients.
INTENDED USE: The IGH-CCND1 Fusion/Translocation FISH probe kit is designed to detect rearrangements involving regions of the human IGH locus, located on chromosome band 14q32.33, and of the human CCND1 gene on 11q13.3. The kit contains two differentially labeled Locus Specific Probe (LSP) pairs. One set of probes covers the 5’ (start) portion of the CCND1 gene and some upstream untranslated genomic sequence as well as sequences downstream of the 3’ (end) part of the gene. The two probes are flanking sequences in the CCND1gene in which both a 3’ breakpoint cluster as well as several individual breakpoints have been observed. 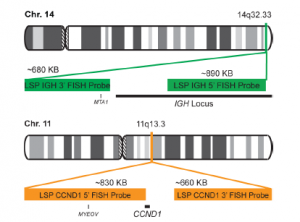